So its Monday, and I had a long weekend, and needed comfort food. Mondays are one of the few nights I don’t have to go anywhere, and don’t have to rush to slam dinner on the table. At least until Girl Scouts starts again.. oy vey.

Tonight I really wanted Chicken Parmesan. But I didn’t have any Parmesan and I had already put on my sweat pants. So I made it without! And it was delicious.

I started out by defrosting 3 large chicken breasts in the microwave. Once thawed, I laid them on a plastic cutting board, and butterflied them down the middle. Making two thin breasts out of each. I then covered the thin breasts with plastic wrap, placed a sandwich bag over the end of my hammer, and gently pounded them until tender and extremely flat. I do this because when frying chicken, I am always worried the outside will burn before the inside is cooked all the way. And I happen to like thin crispy chicken, with anything, and especially spaghetti.

I dredged the chicken in a seasoned flour mix , I was out of bread crumbs too – #thestruggle. For this I just mixed the flour and seasonings listed below in a bowl, and dipped the wet chicken into the mix. I did not use any egg or milk, just the natural wetness of the chicken allowed the flour mix to stick well and make a light crispy coating.

I then fried them in bubbling vegetable shortening in a large skillet. I did 1 tbsp shortening to each breast. TIP: When you flick tiny drops of water off your fingers into hot oil and it sizzles but does not pop – the oil is perfect. I cooked them about 5-7 minutes per side, until golden and dark brown. Then I removed them from the pan and put them on a paper towel bed until the spaghetti was ready.

Then I  simply cooked whole wheat noodles al dente, topped them with my spaghetti sauce and placed the chicken on the side with some spinach for texture. It hit the spot, and I even had a few thin breasts left over, which will make an amazing sandwich tomorrow! Stay tuned 🙂

What are your favorite comfort foods?? I would love to try them!!

I love this recipe. It takes a little longer to cook, but its one you can walk away from. I hate babysitting the oven. This is also a GREAT alternative to pasta, which I eat way too much of anyway. And for me to say its a good alternative says something, because I do LOVE pasta.

First lets discuss the spaghetti squash. It’s the YELLOW one shaped like a small oblong watermelon. There are several usually grouped together, but this one in particular is more of a SUMMER squash, thus its light texture and flavor vs the butternut or acorn squash that are WINTER squashes with dense heavy flesh, and more of a sweet potato taste. All great. But obviously the SPAGHETTI SQUASH is for SPAGHETTI. Duh.

All of these are cooked the same way in my house. First I grab a BIG knife. And I cut it down the middle long ways. These squashes do not saw like pumpkins!! I kind of stab it and move it a little down and stab it again, and wiggle the sturdy big knife to make it crack a little, and move my knife further down. So stab and crack, stab and crack. Eventually you’ll make it all the way around, and be left with two oblong halves. Scoop out the seeds and the slimy bits, doesn’t take very long, and a soup spoon works great.

I season these clean halves with a small drizzle of olive oil, salt and pepper, then place them face down in any dish. I like to cover mine with aluminum for easy clean up later, and about a half cup of water in the bottom. Basically the water steams up, helping keep the skin and flesh soft to scoop out.

I bake this at 400ºF for around an hour. I know its done when the top of the squash skin is sagging down into the squash and when I poke it, its soft. Like a baked potato.

And wham! Done! There are a thousand things you can do with this beautiful roasted squash. The spaghetti and meatballs is one of my family’s favorites.

While that’s roasting in the oven, I go about making my spaghetti sauce. I’m sure most people have their own special way of doing it, but this is mine. Keep it simple.

I take a generic jar of sauce. I really strive to buy the cheapest one–WITH the least amount of sugar. Some of those sauces have 10g of sugar per 1/2 cup serving. ??? I’d rather save my sugar intake for dessert. So I get a jar of decent sauce. I also keep canned tomatoes and minced garlic around, and onions, peppers and zucchini’s and mushrooms depending on my grocery store selection. I also buy pre-made meat balls. I’m sure they’re gross, and here I am preaching about sugar in the sauce and god only knows what the hell is in those frozen meatballs. But I’ll be damned if they aren’t quick, tasty and cheap. Judge all you want, but I can’t afford to be top shelf on everything. 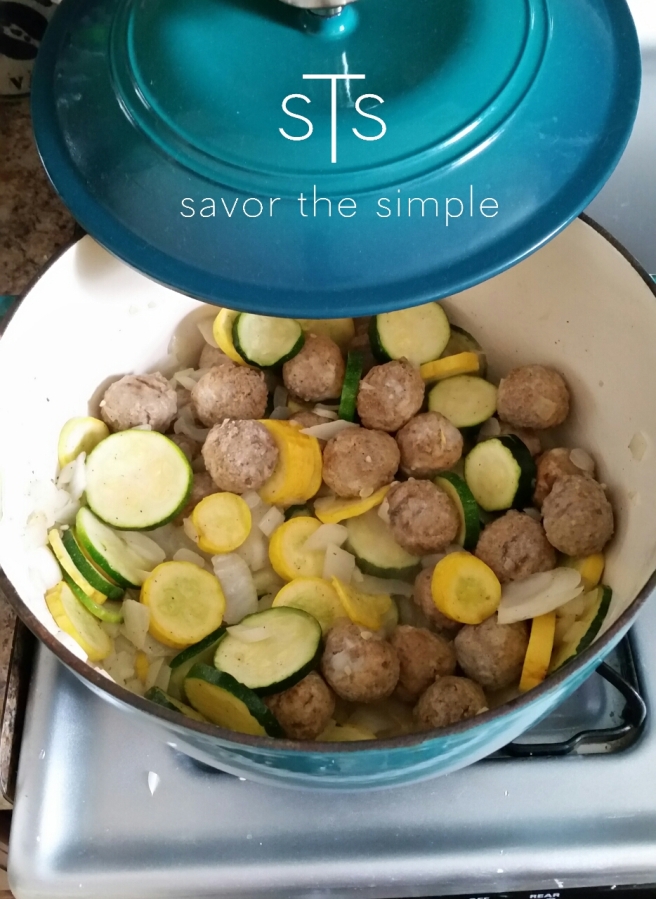 I love to make sauce in my dutch oven pot thing. I always wanted one of these, because every chef on TV uses one, for just about everything. But any pot will do. The rest is simple. In a medium heated pot goes the olive oil, to cook the onions and peppers, then the softies like zucchini, squash, and mushrooms. When they’re almost done, in goes the super wimpy softie, garlic. Then when they’re all happy and mostly cooked, I like to add butter, because why not. And some salt and pepper. I then add those frozen balls of  mystery meat deliciousness. I let them get pretty warmed up, and pour in my sauce and a can of Italian tomatoes. I also then fill the sauce jar with about half cup of water, shake it up, and pour that in too. You wouldn’t believe how much sauce your wasting by throwing out that un-rinsed jar! And the extra bit of water seems to really help my sauce. Sounds weird, but it works. Then they just cook along on med -low stirring less than occasionally until the squash is done.

I just added the sauce on the squash and baked it with the cheese until melted. It was so easy, the foil was already lined in my pan! After I melted the cheese I just scooped out heavy portions for everyone in a bowl, served salad and called it a night. Delicious, mostly nutritious and CHEAP. 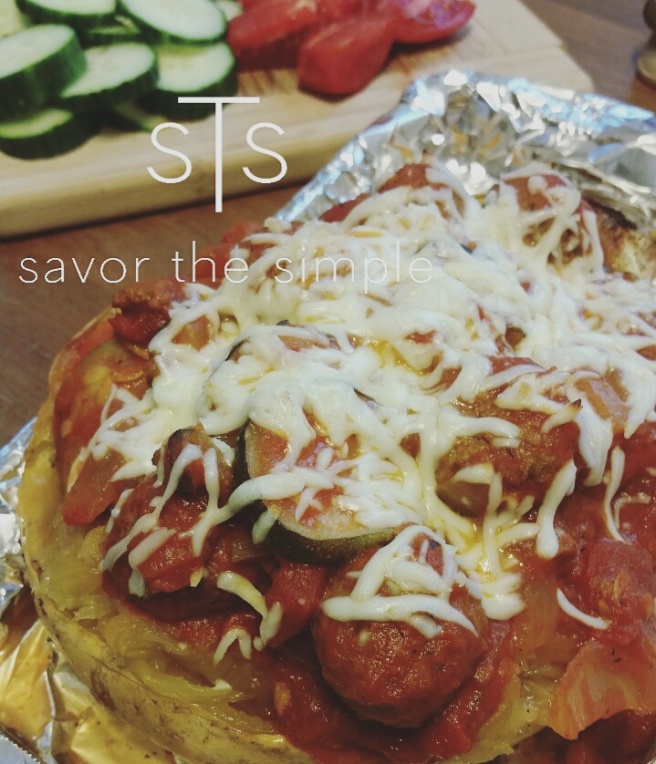 What are some of your favorite healthy substitutes?? I’d love to try them!! Follow me on Instagram Link on my page!